Get fresh music recommendations delivered to your inbox every Friday.
We've updated our Terms of Use. You can review the changes here.

A Plea For Dreamland 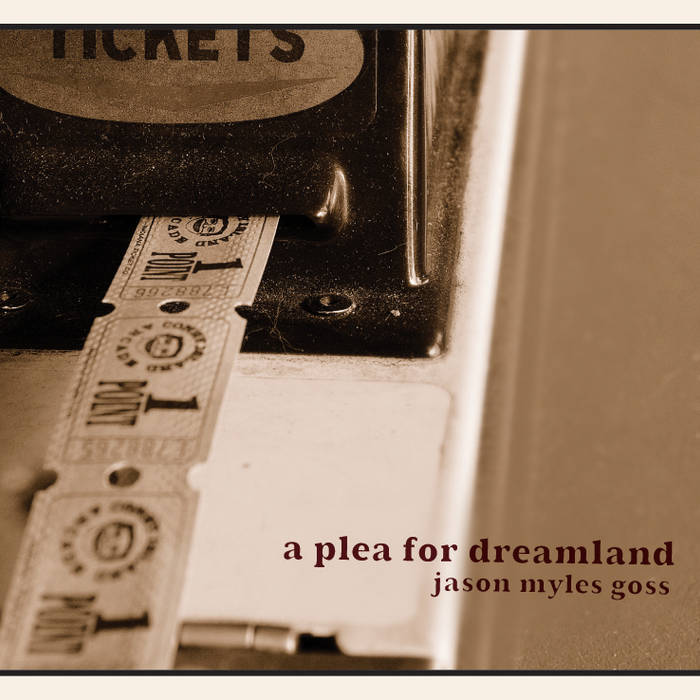 James Brady I love how Jason can draw from a single life event and turn it into a beautiful song. I understand that many songwriters, if not all, do the same thing. But there is something special about Jason. It tells me that everything that happens in Jason's life, no matter how small, means something to him, and he takes nothing for granted. I wish we all thought the way that Jason does. Thank You for your music. -Jim Brady Favorite track: Put A Record On.

Pirate ships, rail yards, skee ball machines, blackberry brandy, and the Coney Island boardwalk—these are just some of the sights, sounds, and smells found in the dimly lit thoroughfares of A Plea For Dreamland, Jason’s third full-length album and first since relocating to Brooklyn. From the opening track it’s clear that this change of scenery (along with four years between records) has brought about many changes in Jason’s singing and songwriting, with many new influences at hand. Here Jason is heard singing in a notably lower, more resonant voice, with lyrics that are more acutely poetic, darkly playful, and, at times, just plain quirky.

“When I moved from Cambridge to Brooklyn, I began writing a lot. I bought this notepad for scheduling temp jobs and I ended up scribbling all over it, whatever came into my head. It was fun then piecing these characters and various threads together, without worrying how they related to me or where they would end up.”

As the title suggests, these songs evoke a feeling of somewhere else—the ballroom of a seaside hotel, a bus station in Meridian, Mississippi, or a dingy car on the Coney Island Wonder Wheel. We find places and characters who are far from perfect but are making their way nonetheless. This is a common theme that runs through the album, with Coney Island taking center stage as a place where the bizarre and fantastical comes face to face with the grit and grime of city life.

“Dreamland was one of the earlier parks in Coney Island, which ended up burning down in 1911. It had the usual thrill rides, but it also had world exhibits like imitation Venetian canals, Alpine landscapes, and a massive Tower of Pompeii. It was like this magically bizarre land from far away. I was taken in by how Coney Island, over time, has become this beautifully wounded corner of the world. Its this place that’s totally laid bare, unapologetic, and equal parts tragic and magic. When we began recording, I wanted the songs to sound magical but also have that dog-eared and exposed feeling."

Jason releases his fifth album entitled, This Town Is Only Going To Break Your Heart, a gutsy and earnest collection of songs which pull together many of Jason's disparate musical influences. It is an album about the towns we love, the towns that shape who we are, and about kids growing up to have kids of their own. It's about learning to carry for them what our parents tried to carry for us. ... more

Bandcamp Daily  your guide to the world of Bandcamp

Quelle Chris joins the show to discuss his most recent release, "DEATHFAME"